Mighty Mobile Bicycle Repair is guaranteed, top quality bike repair parts & service that comes to your doorstep!
Looking for a simple brake adjustment.... is that skipping chain driving you crazy.... how about those leaky seals on your suspension fork..... oh you need a wheel built.... the search is over! Mighty Mobile is here to help!
Let 20 years of friendly service help you out of your next bike conundrum. Serving all of Truckee and North Lake Tahoe.

You watchin'?
Keeping an eye on ole' mama nature.

It's bound to snow again. Probably quite a bit.
But this week's going to be "spring like" and although you might not ride (even though the foothills will be awesome), I'll bet that your bike will cross your mind a time or two this week.
This being the case, just remember - Mighty Mobile Bike Repair is geared up all winter long.
Geared up to take care of that leaky fork seal you promised you'd get fixed last fall.
Geared up to fix that skipping chain.
Geared up to fix that rear shock that doesn't quite "feel" like it did two years ago. Call for quotes.
Call for scheduling.
Get it handled now so you can ride when you're ready!! 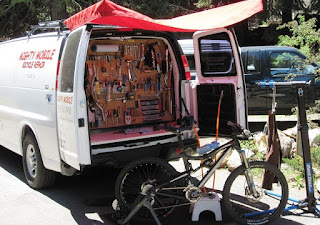 If you're a Facebooker, you can check them out here.

Escaped Tahoe's white landscape yesterday to touch tires to dirt in the foothills.

Felt good to turn the pedals.

Revisit some stuff I have't been to in a while.


That oughta hold me over for a little while. Especially now that, as I write this, it's snowing pretty steady outside the office windows of Mighty Mobile world headquarters.

Although the snow has everybody (myself included) laden w/ a heavy case of "ski fever", this is the ultimate time to get your bike in for some service. Mighty Mobile is up and running all winter long with quick turn around times and parts inventory is at an all time high.
I don't like being backed up 5 days out on the schedule any more than you do and if you wait until the trails start to melt out, that's exactly what I'll be telling you for a timeframe for scheduling.
So get your bike wrenched on now so when the opportunity to go for a ride comes along your bike will be ready.... even if your legs are not.
Posted by Gregg 1 comment:

It's usually around this time of year that I take the opportunity to thank all my customers who keep Mighty Mobile Bike Repair up & running and out & about providing me with my big dream of running a small business.
To all.... a thousand Thank You's!!!!

This year, however, I'm also going to send out some thanks to all the people I get to ride with during the summer. Thanks for all the memories, good rides and good times. Past experiences bring a smile to my face and the thought of future rides keeps me motivated for the days to come.

I should also throw out a little thanks to some of you for understanding in the simple fact that sometimes you have to break a few epic ride eggs to have an epic ride omelet. For all of you that keep coming out to ride knowing that today will likely take longer than expected, we'll get home later than anticipated and we'll probably run into at least a few things we didn't account for.... Thanx. 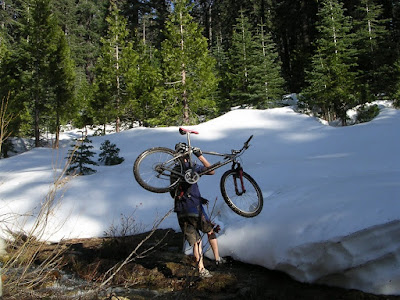 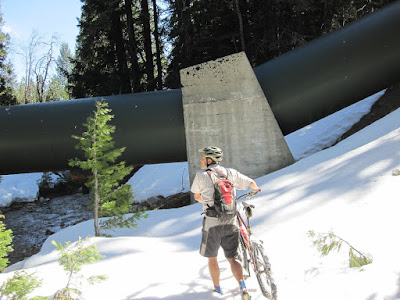 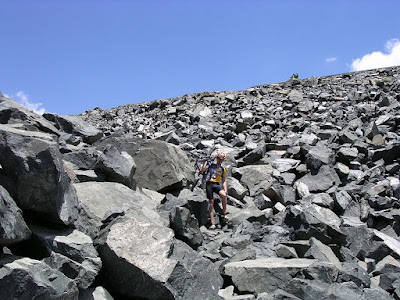 The memory that sticks because it trumps all others.... 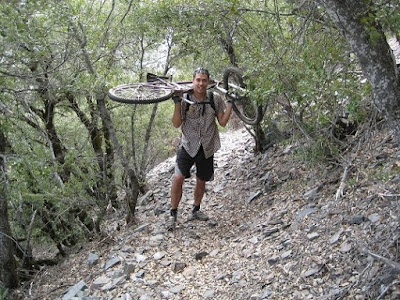 To me, these pics remind me that sometimes it's not all flowy singletrack through fresh blooming wildflowers. 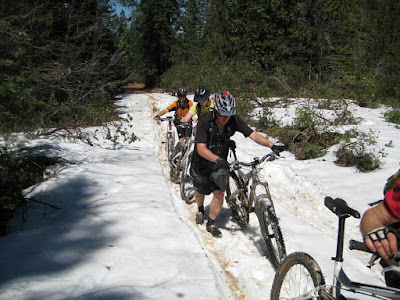 But it can be. 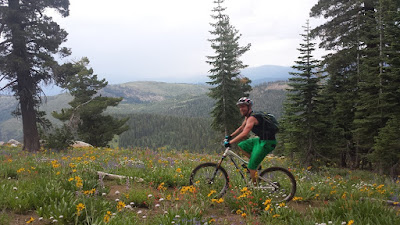 Epic rides materialize most times by accident. A rides mileage alone doesn't necessarily qualify it for an epic (although it usually helps). I've done some 60 mile mountain bike rides that were simply just long rides. I've also been at the far end of a 23 mile out and back in an unexpectedly blinding snow storm while riding huge sections of catwalk on the NID water supply. For a relatively short ride w/ almost no climbing, it certainly gets catalogued in the "epics file" of my mind. 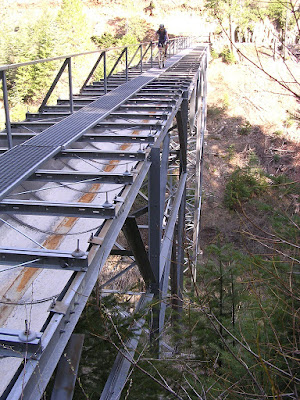 Throw in a wrong turn, inclement weather, or some major mechanicals and you only have the ingredients for an epic experience. For an epic to take its true form, it also needs to have the right people with the mindset to process the current adversity into a positive direction. Sometimes you have to push the envelope of comfort and normalcy beyond the usual experience to make the event stand above the others for years to come. 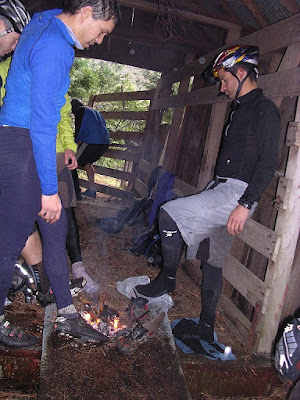 Aaron Breitbard & Mike Nunes
Pioneer Trail
Riders who understand that just because there's a trail on the map, doesn't exactly mean there will be a trail. 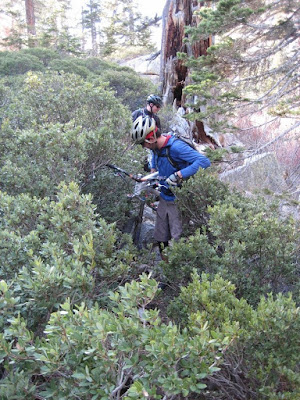 Think you're immune to dealing with underestimated or unexpected trail conditions just because you're my girlfriend. Ha... think again. 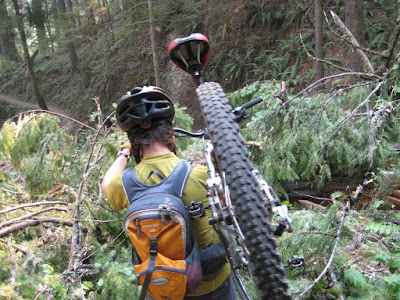 These two guys. Always up for an adventure. I usually don't even have to ask these guys if their into some "bonus" trails. 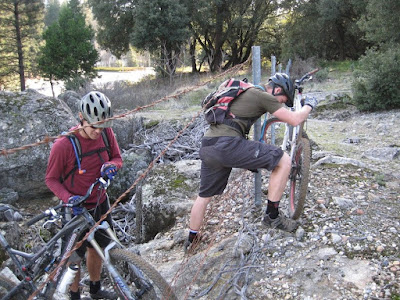 "This is my spare tube."
Mechanicals can often turn a standard ride into a trailside group discussion with resources getting pulled from all sides. This is when it's good to have people in the group with a combination of  ideas, ingenuity and some spare parts.

No Shawn. It'd suck if there wasn't a ladder. 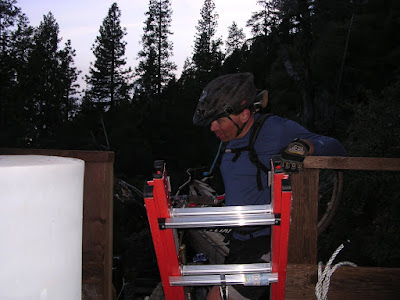 So. Thanx again.
Will we get lost again in 2016? Probably.
Will we come out of trails in the dark? Likely.
Will we have fun? Most definitely.

Dust.
Good.
Figured that would happen.
I'm 24 miles into a 45 mile race and the dust that hangs in the air is surely from one (or both) of the guys that had "put the hurt on" on the previous 3 miles of rolling pavement. Currently, I'm in 5th place.

Rewinding an hour and a half to the start of the race is typical of most other races with lots of suffering as riders jockey for position on a fireroad climb before hitting the first section of singletrack. I've done this enough times to know that I'm pushing way too hard way too early. My view of the seven riders up the road ahead of me is akin to watching the Tour De France race on TV. Tall, skinny riders in matching team "kits" turning the pedals in perfect circles with astonishing authority. As I look to my left, I see Karl Decker (pro Giant Factory rider) and realize that if I'm going to have any chance at a decent result, let alone finish this damn thing, I'd better back off my rapidly diminishing power supply.

Back at the 24 mile mark, with dust hanging in the air.... I'm psyched to be off the pavement and back on trail. Although I haven't ridden his trail in a number of years, I do know that my last trip down the Middle Fork Willamette trail was nothing but fun with its tight, twisty, rolling tread. With 20 miles of racing left on the day, I've got myself into a nice solid tempo that I figured I could hold for the remainder of the race.
Moments later, I'd learn that the dust hanging in the air was from not one, but two riders. SCORE!! As I topped out on one of the many rollers on the trail, I was stopped by the two guys, one of whom was perched precariously off the side of the trail on a VERY steep hill side sandwiched between his bike and the thick manzanita bushes that were keeping him from a 30ft fall down to the river. After helping out the guy who's name turned out to be Jeff (from Reno) we were off again. The guys let me go ahead of them (tanx guys!) and I got back to the business of getting back to business.
I'd chase hard for the next hour and a half, but to no avail.... I wasn't going to catch the two guys in front of me without one of them having some sort of problem.
So, at 3 hours and 26 minutes I crossed the finish line. About 4 minutes off the winner and a minute and a half from second place.
Good times man.....good times.
Posted by Gregg 3 comments:

The "I can't help you" calendar

Wow. Been lagging on the bloggity thing. No time to write. Only time to fix bikes. And if I'm lucky, I can actually get out and ride the damn things every once in a while.
One sure fire way of guaranteeing that I get to ride my bike is leaving town w/ my favorite steed loaded up and ready to ride.
And that's exactly what I'm going to do in the upcoming month/months. With that being the case, I'll get on w/ my "I can't help you" calendar.

Sept 10-15. You can call me, but I won't be around. I'll be in Oakridge Oregon racing the Fat55. This race will definitely push the envelope of strength, bike handling and just how good chamois butter protects my nether regions.

Sept 23-Oct 6th. I'll be heading back to the great state of Pennsylvania to visit friends and family. Also while I'm there, I'll be doing a "bonus" race in the way of the Terror of Teaberry. My friend Buck recommended this race to me. And Buck's never wrong. Ain't that right Buck..... 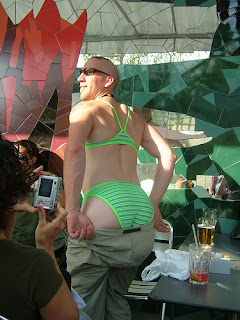 Ok. So maybe Buck occasionally makes some poor choices in terms of garment selection, but the dude is usually spot on when it comes to fun places to ride the bike.

Pic Of The Week